On Monday, May 14, the Norwegian Dutch Chamber of Commerce was founded during a special meeting at the Embassy of Norway in The Hague. During this meeting, Ellen Groeneveld was appointed as chair and Jaap van Nie as treasurer of the NORDCC. As her first act, Ellen Groeneveld appointed the Norwegian Ambassador as honorary chair of the association and Patrice van der Heiden as general manager of the NORDCC Office. 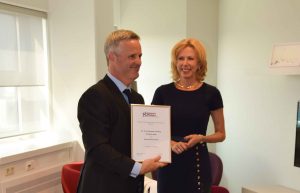 As NORDCC we will provide a networking platform for our members; companies that have bilateral interest between Norway and The Netherlands and business professionals with ties to Norway in The Netherlands. Our mission is to inspire, promote and extend the commercial and industrial relations between Norwegian – Dutch individuals and companies.
For more information please contact the NORDCC Office.